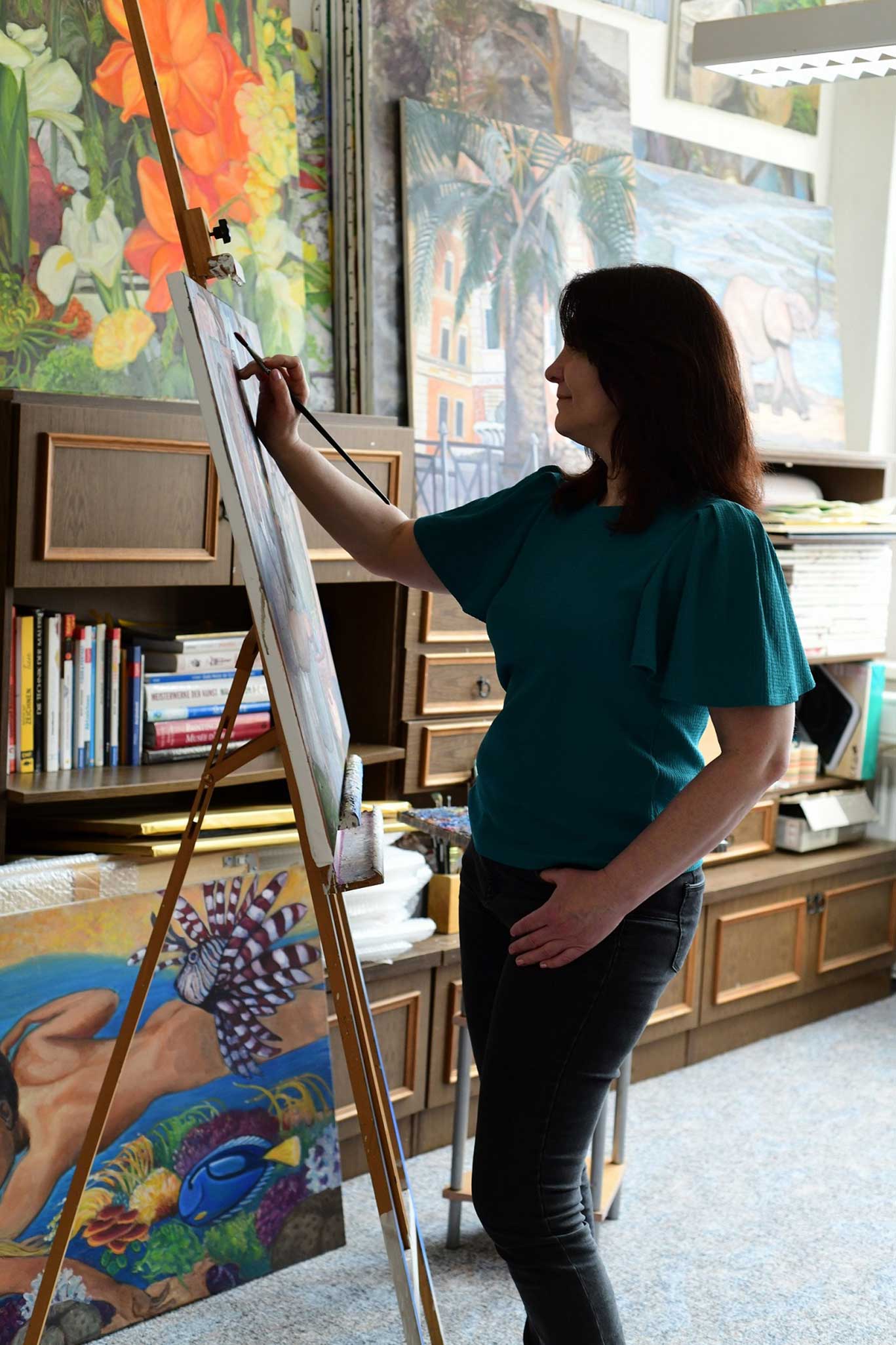 “Tatjana Meier is a painter who has a great gift of conveying the beauty of the surrounding world in her works. At the same time, she transfers through her colours all the atmospheres she holds within her creative soul. Each work is always the result of strong emotions that she lives with absolute naturalness; she is never afraid to take new roads and new techniques. The images she gives us through her creations are the movement of her strong, passionate, sweet and determined soul at the same time.

In her paintings she unconsciously brings back the experiences of her life, starting from her homeland, Great Russia, of which she is very proud. But thanks to many trips Tatjana has made to various European cities, particularly Italy, she has also given us the magic, atmosphere and colours of Rome, Naples and Venice. The strength of her works comes from the strength of her feelings, her sensitivity, her attention and her ability to capture the essence of the places and faces she represents, setting them, like precious stones, on her canvases”. 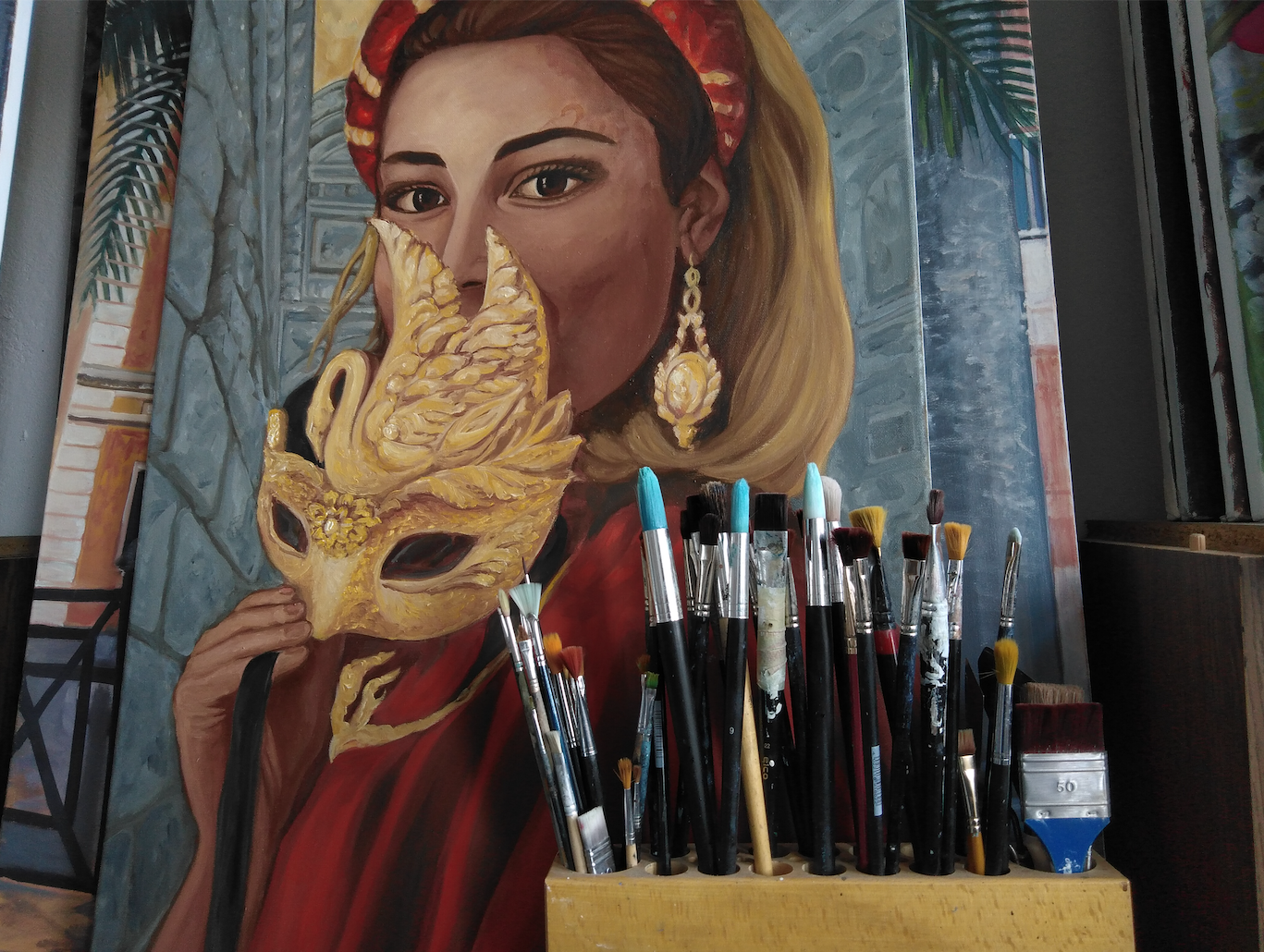 “Several times a year Tatjana Meier visits her friends in Italy. As a result, she creates pictures that are less images of what she sees than reflections of the sum of what she sees and experiences, pictures between reality and fantasy. It is not so much the figurative appearance, the figure of the person depicted, but rather the colourfulness of the objects that the artist plays with.

Her pictorial compositions are always clear and reasonable, the figures and objects are clearly recognisable, real, captivating with their cool objectivity, seem to be taken from life and yet typical, yet on closer inspection they prove to be mysterious, experimental and moving.

The cool objectivity of realistic forms and sharply drawn contours is combined with the poignant sensuality of surreal colourfulness, which at first seems cold and clear, but at the same time contains a fire of warmth and light, which precisely corresponds to the character of Italian flair.

It does not matter whether the pictures depict landscape or architecture or tell stories. Contouring and colour are always recognisable as typical Meier style…It is a signature that is unmistakable and is documented in various techniques; the signature of an artist who has found herself, who is unmistakable and clear, even though she is still hovering between Germany and Italy…” 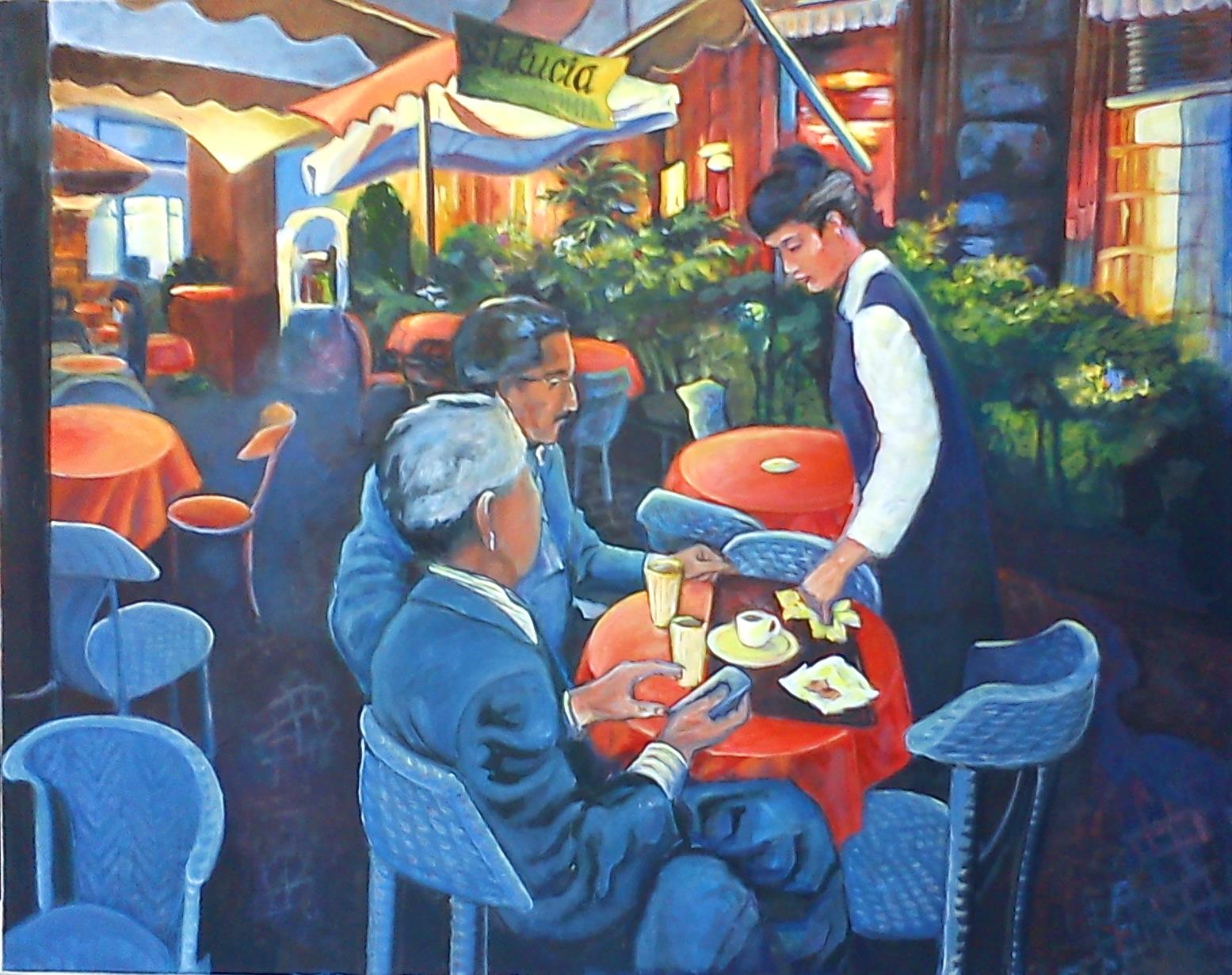 …Tatjana is a product of Europe, because she is Russian, but lives interculturally… The works of Tatjana Meier live in a dimension between dream and reality, between physicality and spirituality. Balanced and skilful in capturing colour tones, she visualises places and objects that are sometimes forgotten, immersing them in a deep lyricism and poetry. Flowers and female figures highlight the seductive and captivating character of the works, told through a refined chromatic expression. The essence of the artist’s objects is sometimes mysterious and restless at the same time, creating a remarkable metaphysical meaning. Consistent yet innovative, the artist’s experimental search follows a refined figurative path with remarkable lyrical and symbolic qualities. 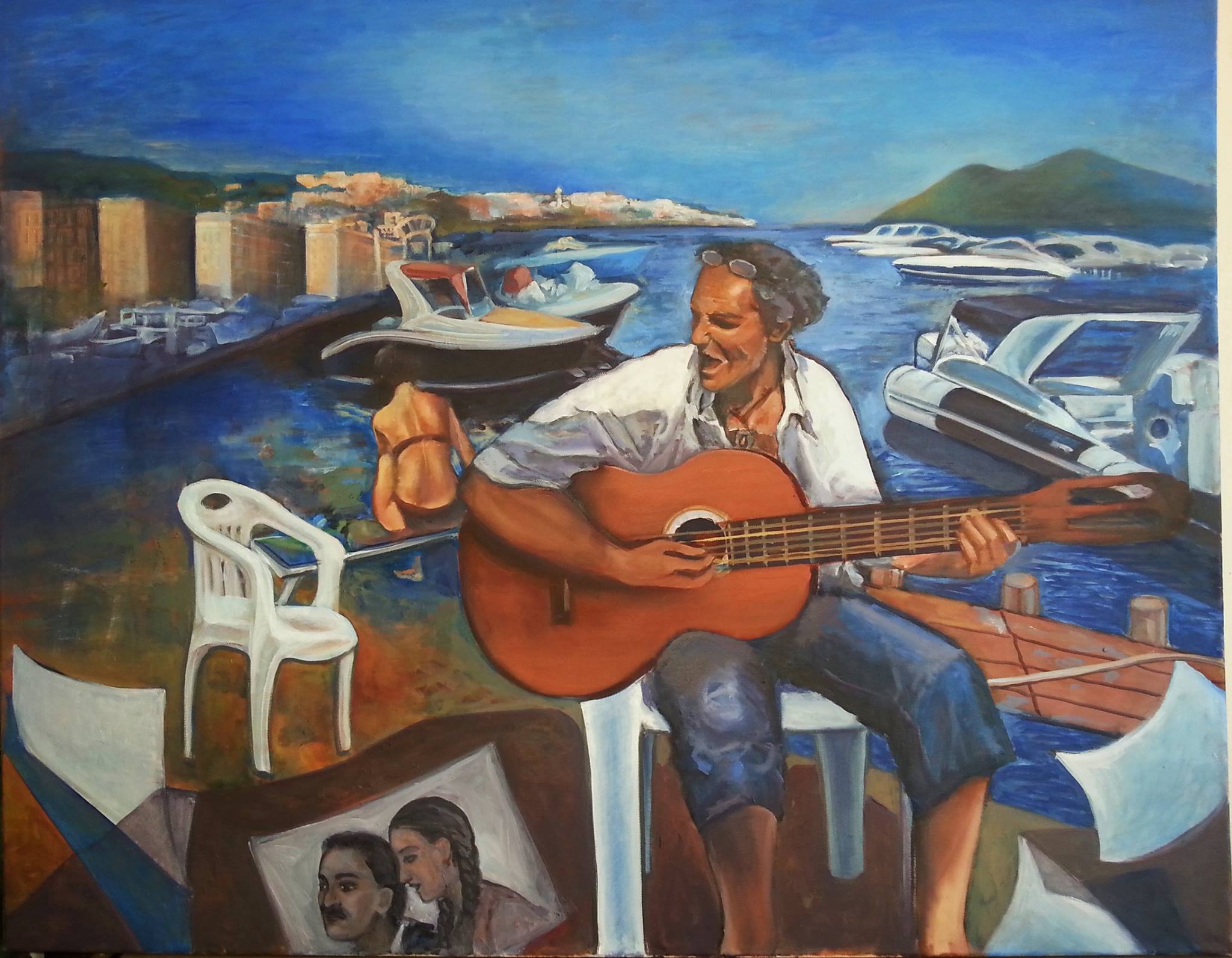 …Tatjana Meier deserves a special honour in the form of this speech, as she appears as an artistic “poetess”. As a “poetess” of forms, moods, symbols and colours. Her paintings are stories that raise questions rather than answer questions. The pictures are parables that trigger a chain of assumptions and connections. On the one hand the viewer has the longing to solve the riddle of these pictures, on the other hand he has the desire to simply admire them without explanation.

Tatiana’s painting style can be described as a synthesis of the styles Impressionism, Expressionism and Fauvism. Despite the attempt to put these pictures into an art-historical drawer, a certain uniqueness always remains. This uniqueness reflects an artist’s path that has been shaped by many journeys. A moment of expectation and pause is captured in many pictures. As if one stands before a threshold without crossing it. As if one gains an insight into a dimension hidden in the picture without being able to penetrate it.

The compositions are open, but not to the audience, but to a universe that one suspects in the depth of the picture, and the viewer is included in an imaginary view. This seems to show the openness and surprise of real life. Life with its mysteries, with its uncertainty and with its urge to develop. Each picture of Tatjana is an unsolved mystery, a promise of another picture. This picture puzzle with invisible beginning and end can hardly be exhausted with just a few exhibitions. 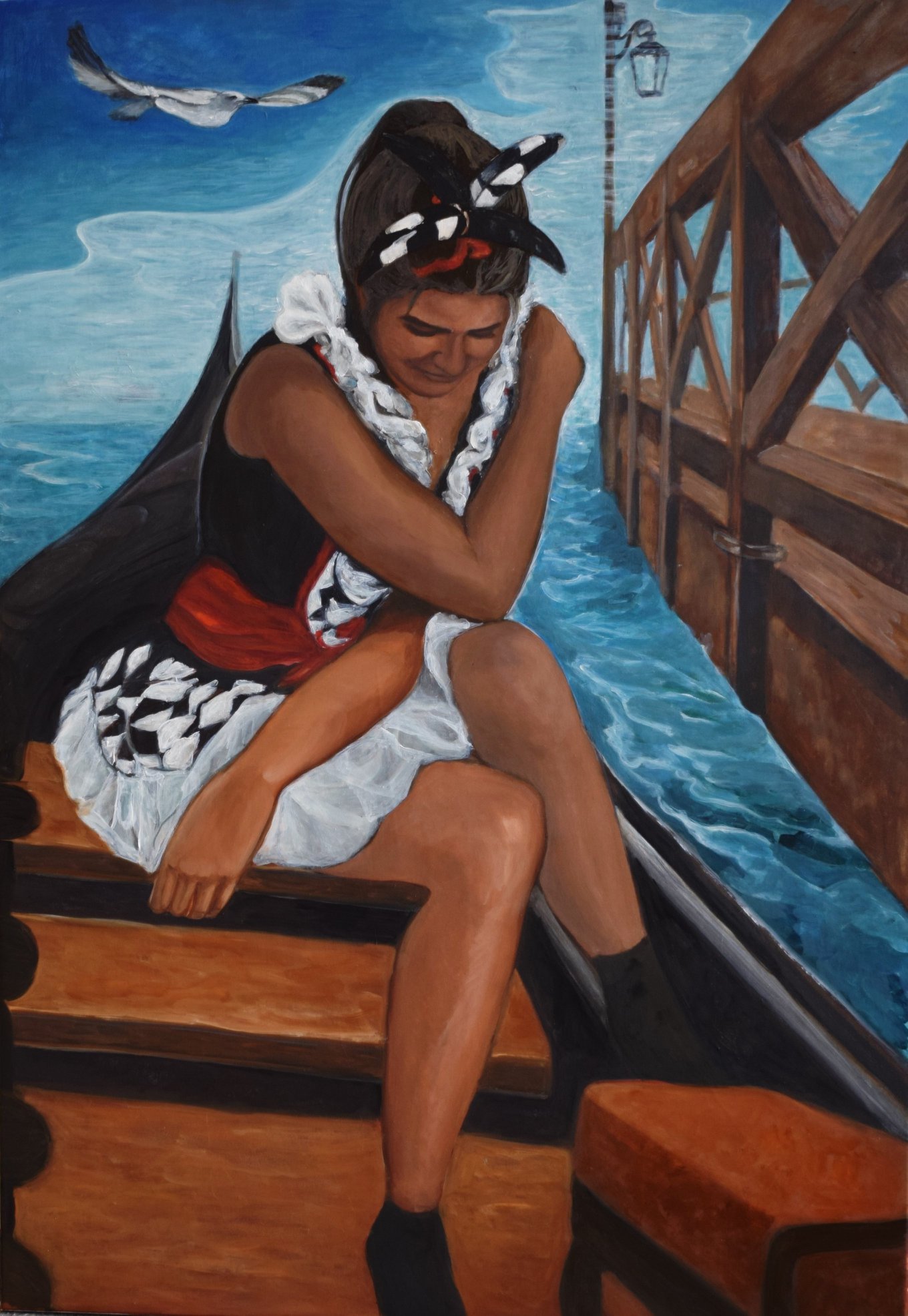 …Tatjana is a product of Europe, because she is Russian, but lives, thinks and acts interculturally. She speaks several foreign languages. In particular, she is familiar with the German culture. Tatjana prepares a complex art and has different forms of implementation. Her special trademark is “grey”.

“Grau” is a word that means everything and nothing. The colour grey is one of the most difficult colours of all, because the basis is always black and white. However, one drop of another colour, or even several, is enough and the black and white grey turns into a colour that impresses.

The sentence “You paint with subdued colours” may sound colourless. But in fact it is an extraordinary quality, because it means the success of the chromatic element in a relationship with light, and that is not easy.

Her paintings often become fantastic and mythical objects in a small format, certainly on a literary basis…Tatjana does not open up immediately, she always keeps a part of her dream world for herself.

This site uses cookies. By continuing to use the site, you agree to the use of cookies.

Accept settingsHide only the notificationSettings

We may request cookies that are set on your device. We use cookies to tell us when you visit our websites, how you interact with us, to improve your user experience and to customise your relationship with our website.

Click on the different category headings to learn more. You can also change some of your settings. Please note that blocking some types of cookies may affect your experience on our websites and the services we can provide.

These cookies are absolutely necessary to provide you with the services and functions available on our website.

We fully respect your wishes to refuse cookies. To avoid being asked for cookies repeatedly, please allow us to store a cookie for your preferences. You can unsubscribe or allow other cookies at any time in order to make full use of our services. If you refuse cookies, all cookies set on our domain will be removed.

We provide you with a list of the cookies stored on our domain by your computer. For security reasons, we cannot display cookies that are stored by other domains. You can view these in the security settings of your browser.

We also use different external services like Google Webfonts, Google Maps, and external Video providers. As these providers may store personal data about you, you can deactivate this here. Please note that disabling these cookies can significantly affect the functionality and appearance of our website. The changes will take effect after a reload of the page.

Datenschutzinformation
Accept settingsHide only the notification